There's something unusual about Jan Vogler's career as a Cellist. We're not talking about the fact that he learned playing Classical Music as a little child and visited the special school for music in East Berlin. And there's nothing truly special anymore in being taught by some of the best musicians of the trade, such as Heinrich Schiff. What truly distinguishes Jan from many of his collegues is that he started out as a member of an orchestra and only later went on to become a renowned soloist - saving him from the prodigal nightmares so many young talents had to endure. Slowly but surely the wish to take things into his own hands matured and he finally decided to resign his position with the Dresdner Staatskapelle in 1997. Since then, Vogler has become not only a guest at the most prestigious concert halls and a succesful recording artist, but also an organisor - presenting the Moritzburg Festival, which just opened its doors for this year's proceedings. As a modern artist devoted to an ancient trade, Jan Vogler still hasn't given up on his mission: To get people addicted to Classical Music again.

Whats on your schedule right now?
I just finished four concerts in New York. This was the end of the season for me and I am happy to have a two week break now, before the summer season starts with concerts in Germany at the Fürstenberg Classics Festival with the Scottish Chamber Orchestra, and at the Moritzburg Festival.

If you hadnt chosen for music, what do you think you would do right now?
Hard question...I grew up in a musical family, my parents and most of their friends were musicians. As a child I was under the impression that playing music is an integral part of everybodys life. I have a lot of interests, but none of them is nearly as strong as the one for music.

What or who was your biggest influence as an artist?
I try to learn from everybody I meet and everything I do. Sometimes it is a phrase in a book and sometimes a word or gesture of a person which opens new doors and makes you understand music better. One of the great musical influences was the Marlboro Music Festival. I came out of East Germany and caught the right moment to still be able to meet with the impressive immigrant generation from Europe like Rudolf Serkin or Felix Galimir. Serkin kept close contact to his European roots and brought young musicians from all over the world to his Festival. The long summers in Marlboro seemed like a sort of a musical paradise to me, it was a contrast to the serious and strikt musical training in East Berlin.

Whats the hardest part about being a musician and whats the best?
Lets start with the best part: After the concert you get to eat... ;-) Seriously: it is a great privilege to work on your favorite project. Music is my life and I am very lucky to be able to do it as a profession.
Hard part: Every concert is an adventure! I love this challenge, but you have to fight with everything you have every time. Every audience is different and certainly every piece of music.The moment you relax you may loose the sharp sense for the edge of each situation.

Whats your view on the classical music scene at present? Is there a crisis?
Well, most of my musician friends are running around in the world and are incredibly busy... If that is a crisis... But of course you are right: changes are on the way and the audience has started to be much more selective and does not always accept what presenters and record companies think is good for them. I see it mostly positive. We have the chance to influence the music scene. I try to do that with my Festivals . The results are interesting and encouraging.
Programming is an important issue. I learned that audiences like good program-combinations which help them to understand motivations and thoughts of the composers and parallels between different periods in music history.

Some feel there is no need to record classical music any more, that its all been done before. What do you tell them?
If you listen to recordings from the1970s and 1980s for example, you will be surprised how few interpretations will still convince you. We learn something new about the composers and their pieces every year. Taste and concept of sound, tempi, and style change drastically at least every decade. We have to remember that interpretation is always linked to the moment when it is presented. I have a few great recordings of all time, but the rest of the records I listen to are not older than 3 years.

What constitutes a good live performance in your opinion? Whats your approach to performing on stage?
It should be alive. All the research and hard work is done when the concert is coming up. When I am on stage I dont want to prove anything, I just want to give my best to make the piece appear. That mainly requires high concentration and full emotional and physical involvement. For me the first seconds on stage are important, thats when I try to throw myself into the piece and establish a contact with my musical partners on stage and with the audience.

What does the word interpretation mean to you?
At first: to understand as much as possible about the composer and his work. You can never have enough interpretation-tools... I usually concentrate on a period in music history for a few years and try discover all the possible sounds, articulations and phrasings which create the particular style.
But interpretation does not stop when you are not playing. The musical partner you choose, the programs you create, that all plays an important role.
One example: I recently had the pleasure to record the Dvořàk cello concerto with the New York Philharmonic and David Robertson, Sony will release the CD in September. Dvořàk wrote the piece in New York and was still under the influence of American tunes form the new world. At the same time a love story influenced this piece very much. I did a lot of research on the subjct and decided to couple the concerto with pieces which might help to see this famous work in a different and new light. Besides the cello concerto, Angelika Kirchschlager, Helmut Deutsch and I are performing songs on the CD which were important for this great concerto.

True or false: It is the duty of an artist to put his personal emotions into the music he plays.
100% true!!

True or false: Music is my first love
I think it is true... I was very young...

True or false: People need to be educated about classical music, before they can really appreciate it.
Not necessarily true. Education is a key for almost everything and certainly helps to understand music. But I have seen people who had no musical education being deeply touched by a concert. A person who likes the first concert he/she hears might become very interested in musical education after the experience. That is our chance and responsibility, to bring our enthusiasm for music across to the audience.

You are given the position of artistic director of a concert hall. What would be on your program for this season?
Big job and very difficult to do really well!
There is no general answer to this. It depends very much on many factors such as: Where is the concert hall? What kind of hall? What kind of audiences? Does the place have a musical history or is this a completely new project? My focus would be to bring an authentic program to the people which represents their own culture, but also puts them in touch with new pieces from areas of the world they dont know well and/or by composers they hadnt had a chance yet to discover. The hardest part is to mix those elements right... ;-)

Have you ever tried playing a different instrument? If yes, how good were you at it?
Piano, when I was in school... I was terrible...! I guess my heart was always with the cello... 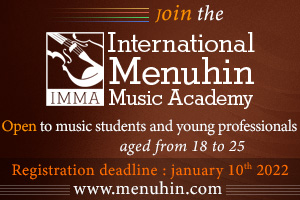